Mother Earth Day this year will witness something special. World leaders will gather at the UN Headquarters in New York on 22 April for the initial signing ceremony of the Paris climate agreement.

The agreement is the fruit of a difficult labour. The strenuous negotiating process involved 196 governments and culminated at the 21st UN Conference on Climate Change (COP 21) in December 2015.

To come into force, the Paris agreement needs to be ratified by at least 55 countries representing an estimated 55 percent of total greenhouse gas emissions. The Caritas confederation sees the urgency for the agreement to take effect as early as possible and urges prompt action. We call on all governments worldwide to avoid any delays in ratification and proceed resolutely according to their national rules. 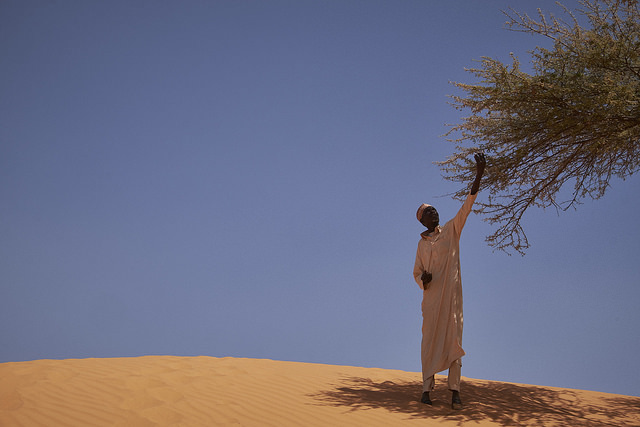 A man picks leaves off a tree on sand dunes in the village of Guidan Kaji near the border with Nigeria on the outskirts of Diffa, Niger on February 13, 2016. Photo by Sam Phelps/Caritas

It is a historic agreement as it marks a shift from previous climate negotiations characterised by a lack of political will. It sets out the international rules for tackling climate change in the coming decades. Importantly, it gives the message  that climate change today is recognised as a real threat for our people and planet, and that coherent cooperation of all countries is key to dealing with it.

Greenhouse Gas Emissions rose more in the ten years between 2000-2010 than in any other decade since the beginning of the industrial revolution, according to the Intergovernmental Panel on Climate Change. The alarm bell is ringing  and the race is on to save our planet and our children from a slow death. Caritas  has been following climate negotiations for several years. In view of the new UN climate agreement, we intensified policy dialogue with governments and UN agencies  throughout the year spanning from COP20 to COP21. We contributed to the debates with our vision grounded in justice, solidarity, the care for creation and the preferential option for the poor, and strongly inspired by the vision Pope Francis outlined in his encyclical letter “Laudato Si’, on care for our common home” in which he calls for ecological conversion. A delegation of Caritas organisations from four continents participated in COP21 to bring the voice of the world’s poor and most vulnerable communities into the political – and technocratic – decision-making space.

Caritas believes that the final agreement should have more strongly tackled the structural causes of climate change and provided stronger guarantees for destitute communities already suffering the effects of climate change. The agreement should have called for a transformation of the predominant market-driven economic model and heralded a new era where development would unfold in respect for the environment and humankind.

The Paris agreement did not achieve such a radical change, however it marks a step in the right direction.

Among its positive aspects is the long-term goal of limiting global warming to “well below 2°C above pre-industrial levels” and of committing “to pursuing efforts to limit the temperature increase to 1.5°C”.

There is also the 5 year review mechanism which, if rigorously applied, can allow for progressive cuts in Greenhouse Gas Emissions; the intrinsic link between climate action, sustainable development and poverty eradication is made explicit. Greater responsibility for tackling climate change is consigned to developed countries, while the specific needs of developing and least developed countries have been recognised; the relevance of participation and of traditional and indigenous knowledge in adaptation programmes in the field is recognised; transparency in all phases of implementation is emphasised.

Among its shortcomings, the Paris agreement neither contains binding guarantees for human rights, nor for the respectful use of land or for food security. It doesn’t address the problems of demand for consumption or international trade, it overlooks shipping and aviation, and it remains vague on financing adaptation measures. It relies on technologies that absorb emissions, rather than laying the groundwork for effectively and rapidly phasing out fossil fuels.

Though not representing the perfect answer, the Paris agreement is the only international instrument that exists today, upon which national policies will be based in the future.

Being an international framework, the agreement needs to be completed at national level through an interpretation and implementation that fully takes into account the most vulnerable and promotes human rights. Caritas organisations will engage in public awareness in their respective countries and will dialogue with their governments, playing their role in contributing to coordinated global efforts to contain climate change and protect people and our Mother Earth.

We salute the opening for signatures of the Paris agreement on Mother Earth Day, but the hard work begins now.