Reunited one year after Nepal earthquake

Back in Nepal for Caritas Internationalis, one year after the two earthquakes that claimed 9,000 lives in 2015, I once again take the Araniko Highway that goes to the Tibetan border, 150 kilometres north-east of Kathmandu. The road has been cleared, the rubble is piled up on the verge, and the houses ripped open by landslides from the 1,000 metres of mountains above our heads have been abandoned. Yet in the middle of this sometimes lunar landscape life has resumed, businesses have reopened, almost as if nothing had happened.

This lively atmosphere changes completely at the village of Tenteli, one hour from the border. I stay there overnight because I want to find the man who appears in this photo that has been so much on my mind over the last year: the one of this crouching and dazed man, staring at the blue door frame of his house reduced to dust. I climb up to the village and show the photo to the residents who point out Nawang Tamang’s house. Nawang isn’t in the village. He’s gone to visit his sick son-in-law in Gati, an hour from here. I come back the next day. But at 8 o’clock, Nawang still isn’t back. So I’ll come back at the end of the day, and in the meantime I decide to take the highway up to the border. 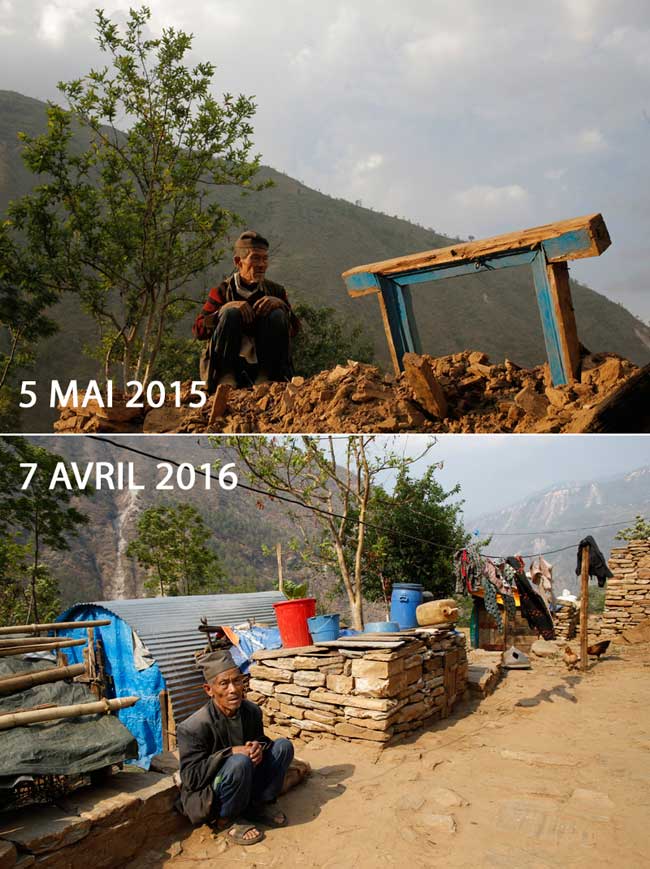 Photo of Nawang Tamang taken days following the quake (above) and one year after (below). Photo by Matthieu Alexandre/Caritas

On the way back, I find Nawang who agrees to confide in me. He was born in this village, like his father before him. Nawang had built his house 35 years ago, in order to pass it on to his grandchildren. Of this house, like others in the village, nothing remains. Only three of the village’s 120 houses withstood the earthquake. Nawang is married, indeed twice over. As his first wife was unable to have children, in line with tradition, he married her younger sister, without separating from his first spouse, for whom he still seems to bear great affection. His expression clouds over on recalling her death. On 25 April, the house collapsed on top of her. She was evacuated to Khatmandu by helicopter, but died from her injuries 12 days later.

In the weeks following the earthquake the village received food rations, hygiene kits and wheat seeds to contribute towards their food security ahead of the rice harvest, and corrugated iron sheets to build temporary shelters. The government gave each family 25000 rupees (just under 300 US dollars).

A little further south, in the village of Taukharpa, Caritas came to help the villagers. Corrugated iron sheets enabled them to build temporary shelters. Wheat and lettuce seeds were distributed, enabling them to get by while awaiting the next rice harvest. I’m astonished at the resilience shown by the people I met. The Nepalese expression “Ké Karné?”, which can be translated as “What can we do? That’s the way things are!”, aptly conveys their fatalism. However, while many have shown great courage in the face of this stroke of bad luck, which we should bear in mind was followed by a gas and petrol boycott by neighbouring India during the four winter months, everyone is asking for their house to be rebuilt rather than receiving money. 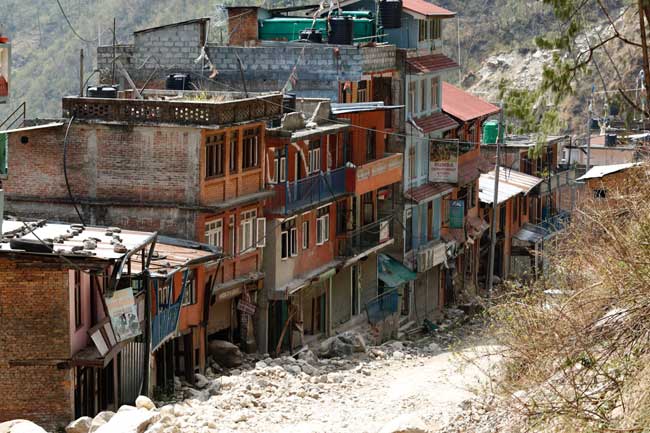 Just as I’m busy sending photos to Europe, I hear a thud and my armchair starts to vibrate: a 4.5 aftershock on the Richter scale, with the epicentre located 6 kilometres south of the town, in Patan. It’s the most violent aftershock I’ve experienced, and apparently the most violent over the last year, although on an altogether different scale from the 12 others felt last year between the two earthquakes. My friend Pramod, who’s putting me up, rushes into the living room to get me: “We have to get out quickly!”. We hurtle down the stairs, with no time to take any personal belongings with us. Pramod halts in the middle of the staircase, a few metres from the door that gives onto the courtyard. “It’s OK, it’s stopped,” he says. “There hasn’t been such a strong one in a long time,” he admits. “It also lasted quite a long time, long enough for us to decide to get out of the house. Normally, we don’t react any more,” he explains. “It always halts conversation for a moment, but we don’t run out every time! But this time it lasted a good 4 or 5 seconds. It’s a long time I can assure you, time enough to realise what’s happening… and what might happen if you don’t react quickly.”