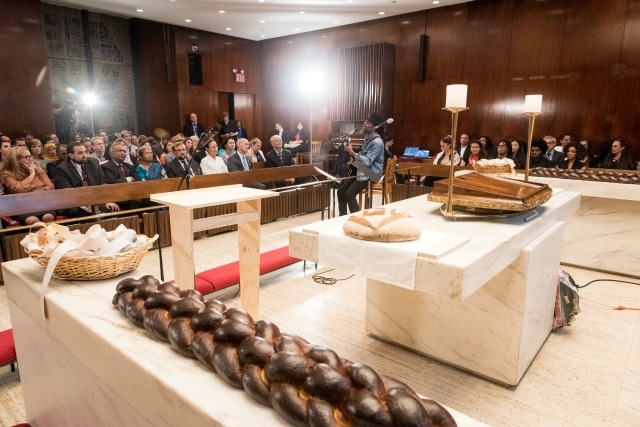 The Breaking Bread event was marked by colourful moments of music and performance. WFP/Catianne Tijerina

The simple tenet of sharing food with others who have none runs through all religions. The act of ‘breaking bread’ was the inspiration for the eponymous event held on 21 September during the UN General Assembly’s High Level Week in New York.

The event gathered representatives from diverse faith-based organisations to celebrate the inspirational role of faith communities in alleviating hunger and to affirm joining together to accelerate progress towards the Sustainable Development Goal of Zero Hunger.

“We are gathered together tonight as communities of faith,” said Master of Ceremonies, Joshua DuBois, who worked on faith-based partnerships for US President Barack Obama. “With the power of faith and the diligence of our work together, we believe that zero hunger is achievable in our lifetimes,” he added.

“Hunger has no religion; hunger has no culture; hunger has no nationality. Yet every religion, every faith, requires that we feed the hungry,” said Executive Director of the World Food Programme, Ertharin Cousin.

“Tonight as we break bread, express our support and honour faith, we symbolize our friendship, commitment and solidarity towards the 795 million people who will go to bed hungry tonight, who are depending on us to change the opportunities for them,” she continued. “They depend upon our commitment to share food with those who are in need.”

The event was marked by colorful moments of music and performance. The New York Andalus Ensemble sang in a mix of Arabic and Hebrew. A spoken word performance by Trace DePass and Talia Wray brought to life stories of people from around the word.

One story was of Juan from Ecuador: “Sharing food together is a blessing: having a family, a wife, and food,” his words articulated through the performers. “Food tastes better when we are together. For both my wife and for me, it is a joy to see our children satisfied after eating a meal.”

Another was the story of Zakariya, who worked to deliver food and medicine to his compatriots in Syria. “The first time I was delivering food I was so nervous. What should I say? I wanted to show them that I am exactly like them. I didn’t know how to knock on the door or how to tell them to take the food. It is hard to say how they felt when they received the food – they were happy and ashamed at the same time, and so was I.” The performance ended with his poignant words: “Food is the most important gift in life because it is life.”

The event was streamed live on Facebook, watched by  thousands of people across the globe, many of whom shared messages of what breaking bread means to them: “Breaking bread together is what unites all and enables us to connect,” said one follower on Facebook. Another commented, “’Being able to eat whatever you want to eat is not a luxury. It’s a basic human right”