Monitoring children at risk of malnutrition

Maria Mendoza opens the doors to her driveway in Punta de Mulato, Venezuela in early July. She’s preparing for a weekly growth monitoring session for children under five. Caritas volunteers who have been inspired to help during the Venezuela crisis carry chairs and tables from the Church grounds. A scale is set up, a measuring tape adhered to the wall, and the bags of strawberry and vanilla flavoured nutritalimento, a nutritional supplement, are prepared to hand out to the participants.

As the mothers begin to arrive Maria and fellow volunteer Miriam Montaño, a retired teacher, register them at the door. It has been only two weeks since the children were enrolled in the SAMAN (Alert and Monitoring and Nutritional Assistance System) program after showing signs of being at risk of undernourishment. But their cheeks are already filling out thanks to the three daily snacks the nutrialimento provides. 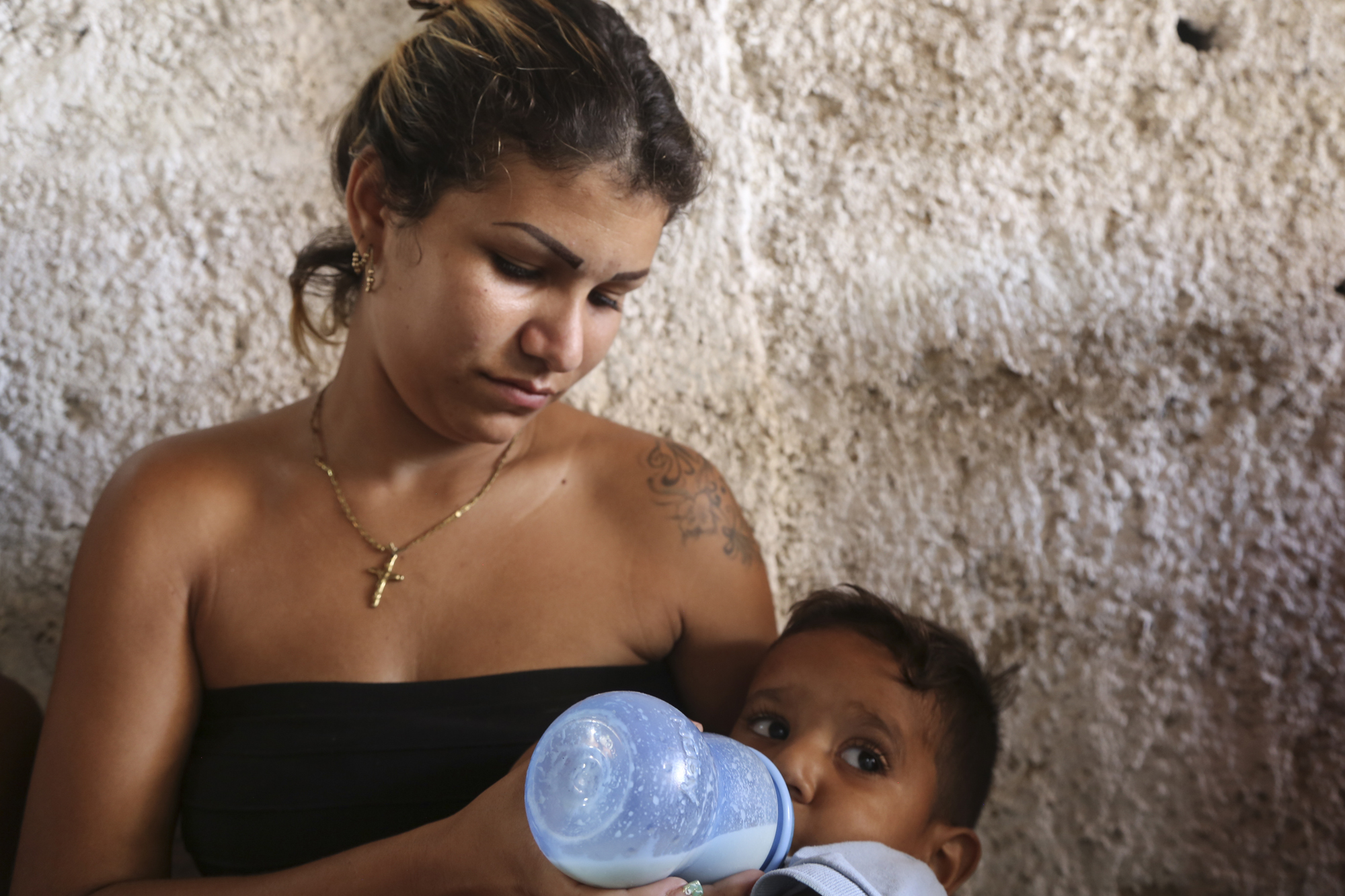 Claribel Morales, mother of 3, feeds her youngest son, Yordin, nutrialimento while she waits to have his growth monitored by Caritas Venezuela volunteers. “He’s much thinner than my other children,” she says comparing Yordin to her older children who were born before the crisis. “They were chubby, he’s thin. I don’t have to force him to drink the nutrialimento. He asks for it.”

Everyone feels the effects of hunger

Maria and Miriam can relate to the children, as can all the volunteers. They’ve all known hunger. They’ve all suffered the impact of the Venezuela crisis’ galloping inflation that has decimated spending power and topped the minimum monthly salary out at a $1.50 a month, the equivalent to one kilo of meat. “I have eaten breakfast for two years,” María says. Miriam adds:

In Caritas, they find hope and have joined the rallying call that Caritas director Janeth Marquez, has deemed as the “opportunity to save the lives of 300,000 children.”

At Maria’s driveway children and caregivers register and take a seat on blue plastic stools. Dr. Albina Rosas begins a chat on how nutrition works and the importance of using safe water to prepare the nutrialimento supplement. Tap water arrives once every four to six weeks, and even then it is brown and filled with debris. In response Caritas uses the SAMAN sessions to introduce simple technologies to clean water. This includes solar purification and easy to make filters as well as encouraging people to routinely boil water.

Dr. Rosas is particularly concerned about hygiene and how unsafe conditions can lead to skin infections and stomach problems. A bar of soap costs 3 million bolivares, more than half the monthly take-home, making it a luxury relatively few can afford.

“You buy the soap, or you buy food” Rosas says.

A child with a skin infection might have trouble sleeping, or worse be at risk of further complications.

Lack of basic hygiene can also result in diarrhoea, which would quickly erase any weight gains and set the children further back in their development. The cost of primary care is prohibitively expensive and there is a shortage of basic medicines on the market. In these circumstances teaching artisanal methods of water-purification and other coping strategies can be a matter of life and death. 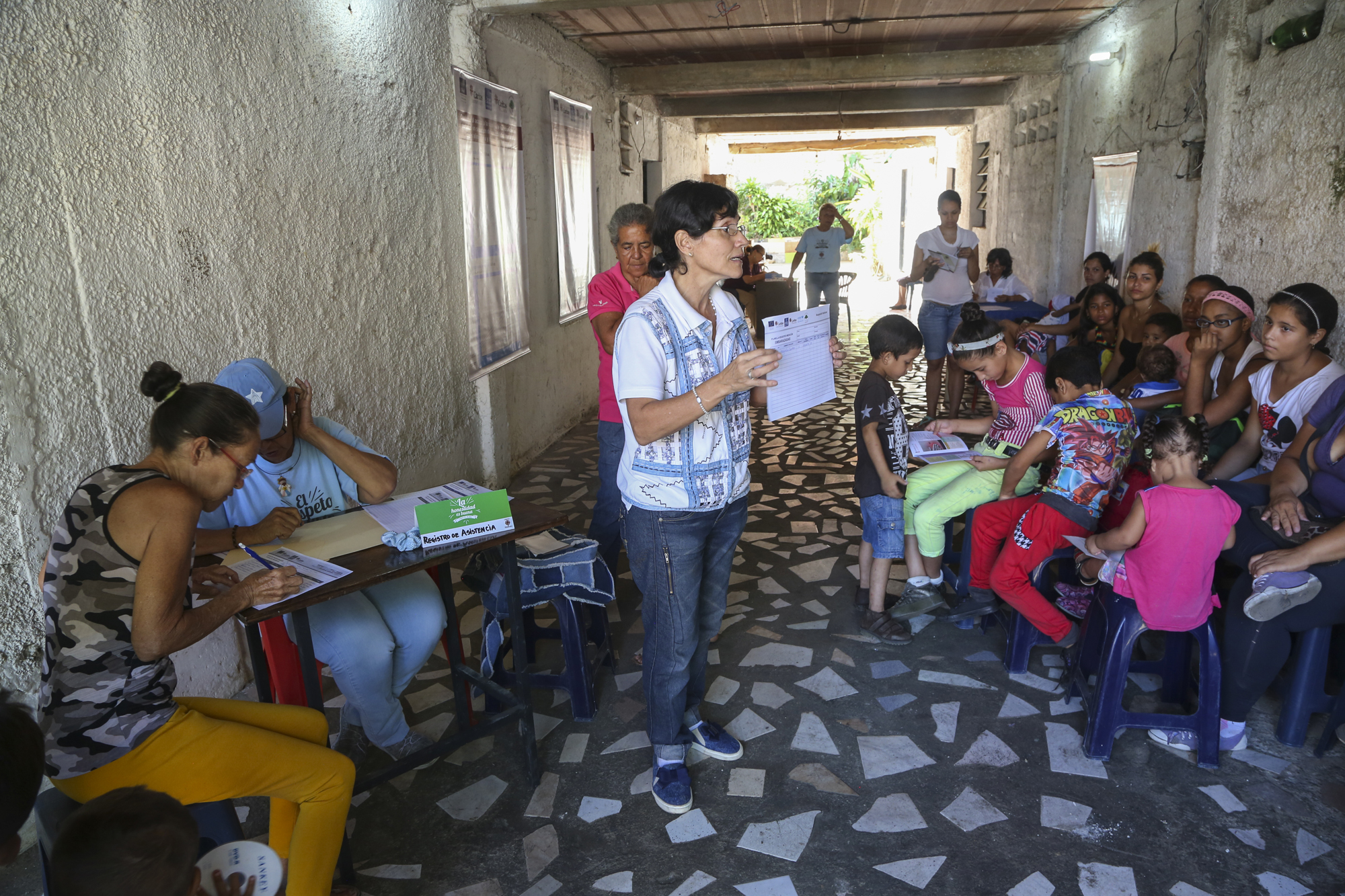 Caritas Venezuela volunteer Dr. Albina Rosas leads caregivers in a nutrition session and how to protect their children from disease. Children already vulnerable due to under-nutrition have a harder time fending off disease.

“Food security has resulted in the weakening of the general population to such an extent that common illnesses that once were managed with first aid or even home remedies are now exacerbated because people are weakened, and their defenses are low,” Rosas says.

“We’re seeing children who might come to the clinic with a simple case of bronchial asthma, but because of lack of medications, lack of inhalers and antibiotics, that simple case might become a full-blown respiratory infection or even pneumonia. A child might even die from illnesses that were once quickly resolved in Venezuela.”

Putting the brakes on under-nutrition

With the educational session finished the caregivers begin taking their children one-by-one to get their height, weight, and arm circumferences checked.

The older ones step on the electronic scale and watch boxy numbers flash on the grey screen. The babies’ weight is gauged by weighing their caregivers with and without their little ones held in their arms. Each gram gained is a victory celebrated with a high-five or a pat on the head from Fr. Alvaro, the parish priest, and director of the local Caritas chapter.

Beaming with pride, mothers and grandmothers whisk their children off to meet with Dr. Rosas or Dr. Luisa Carlotta Castillo. In each child she attends, Dr. Castillo sees the reflection of her 15 nieces, nephews, and grand-nephews. Many of them now form part of the Venezuelan diaspora. 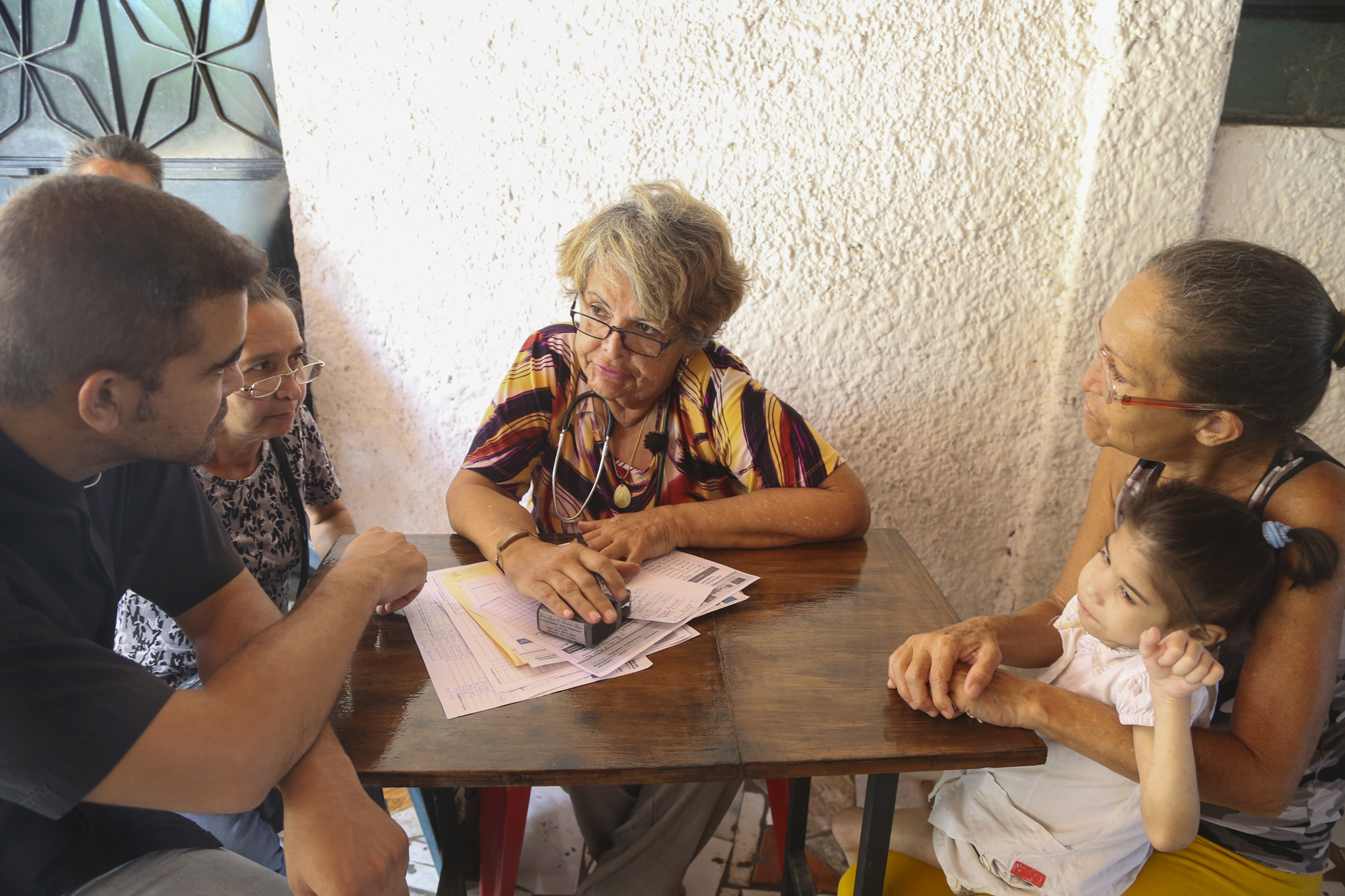 Fr. Alvaro, left, and Caritas Venezuela volutneer Dr. Luisa Carlotta Castillo, center, discuss how they can assist a grandmother who arrives at the session in search of assistance for her chronically ill granddaughter.

Dr. Castillo coos over the babies and congratulates the mothers. “Even a 500-gram weight gain in a short period of time is significant,” she says.

Painfully aware of the critical developmental window of the first 1,000 days, Castillo works to empower caregivers. She offers them advice on keeping their children healthy and making the most of the nutrialimento they’re receiving by complimenting it with whatever food they can source. Hunger affects children more than lost weight and lethargy. It often means increased illness and missed school days. Dr. Castillo says:

“This work fills me. We’re helping to put the brakes on and even reversing under-nutrition. If we can improve the outlook for these children who otherwise might face cognitive impairment that can affect their ability to earn their daily bread in the future, we can reverse the long-term impact of the hunger we’re facing.”

Maria has prepared a special treat for the families – chicha, a sweet drink made of rice, sugar, and milk. The children hover near the plastic jug hoping to score a second helping while the volunteers check the stats of each child on a World Health Organisation nutrition chart. Volunteers are meticulous in recording each detail. They can be seen checking and rechecking which zone the children fall into – the healthy green zone, the yellow warning zone, or the red zone that alerts the team that the child is severely malnourished.

The statistics collected at the Caritas run-SAMAN sessions offer up concrete numbers of Venezuela’s hunger crisis and help fill the void in the absence of official statistics. The government hasn’t released authorized figures since 2009 making it difficult for organisation’s to quantify the severity of the crisis.

To date, more than 15,000 children under 5 have been assessed by Caritas. More than 10,000 of them needed to be enrolled for further nutritional support.

Beyond that, such programs help the Church gauge where further assistance is needed and respond in kind. As a result of the SAMAN program Fr. Alvaro started an ‘olla comunitaria’. This is a ‘community pot’ that provides soup to vulnerable people like children and the elderly.  It recently increased its frequency from one day to three days a week. The education branch of the Church saw a need to compensate for missed school days and recorded educational programs to air on the radio. 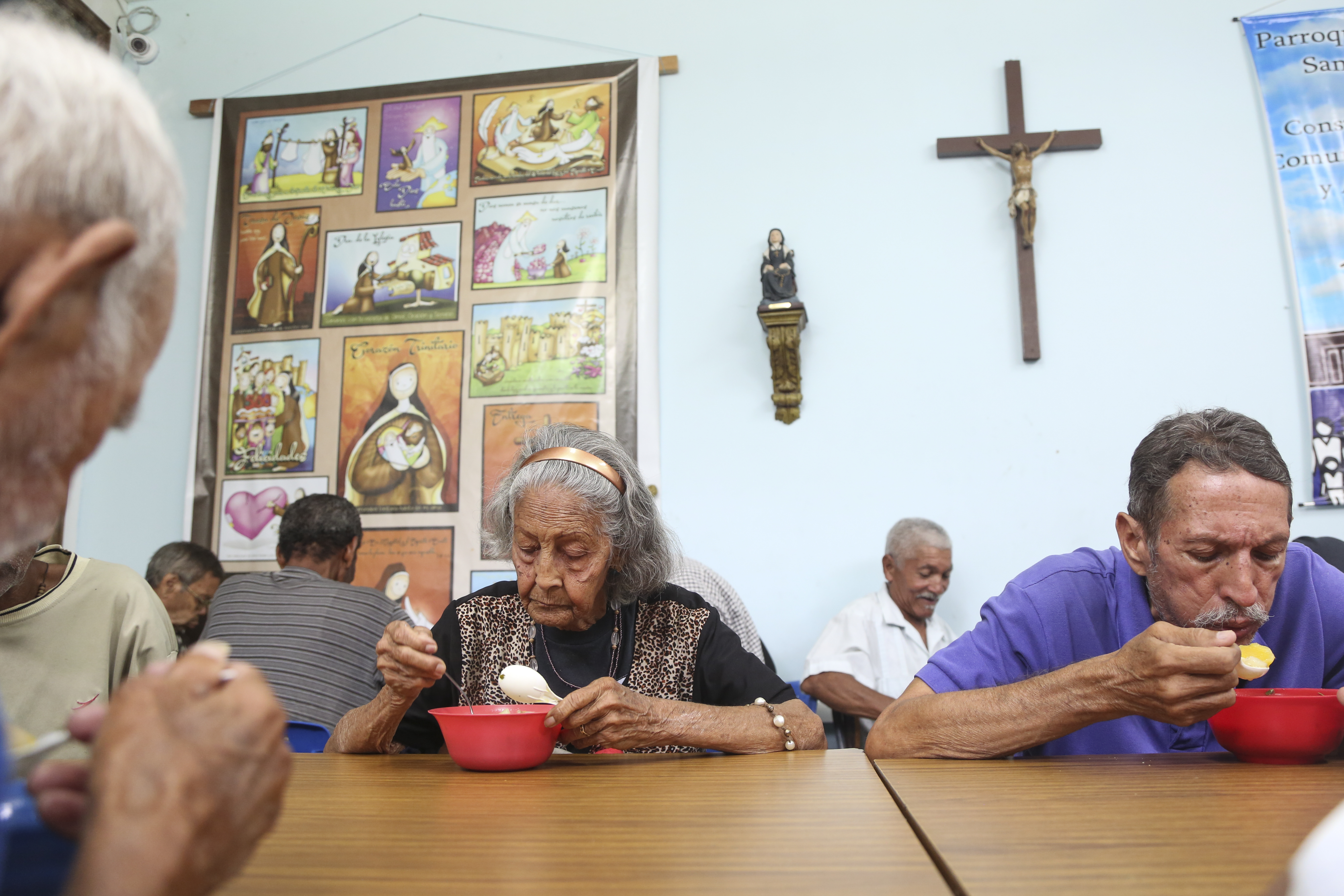 The weekly ‘olla comunitaria’ (community pot) in San José de Obrero Church started off serving 40 people and has now grown to feed more than 500 each week.

Recovering the joy of childhood

As the caregivers leave, they’re handed new packets of nutrialimento to tide the children over until the following monitoring session. Results are promising, in only two weeks time 14 of the 16 children made significant enough weight gain to pull them from the yellow at-risk and red malnourished zones, to the green one.

For Dr. Rosas, however, the best indicator of progress is not in numbers but in the smiles and reactions she gets from her young patients. “It’s not just about recovering weight,” she says “Weight is just an indicator. When you see a child who is once again responsive, who answers your questions and is so energetic that the mother no longer knows how to keep her child still, that is the greatest satisfaction. We’re seeing children recover the joy of childhood.” 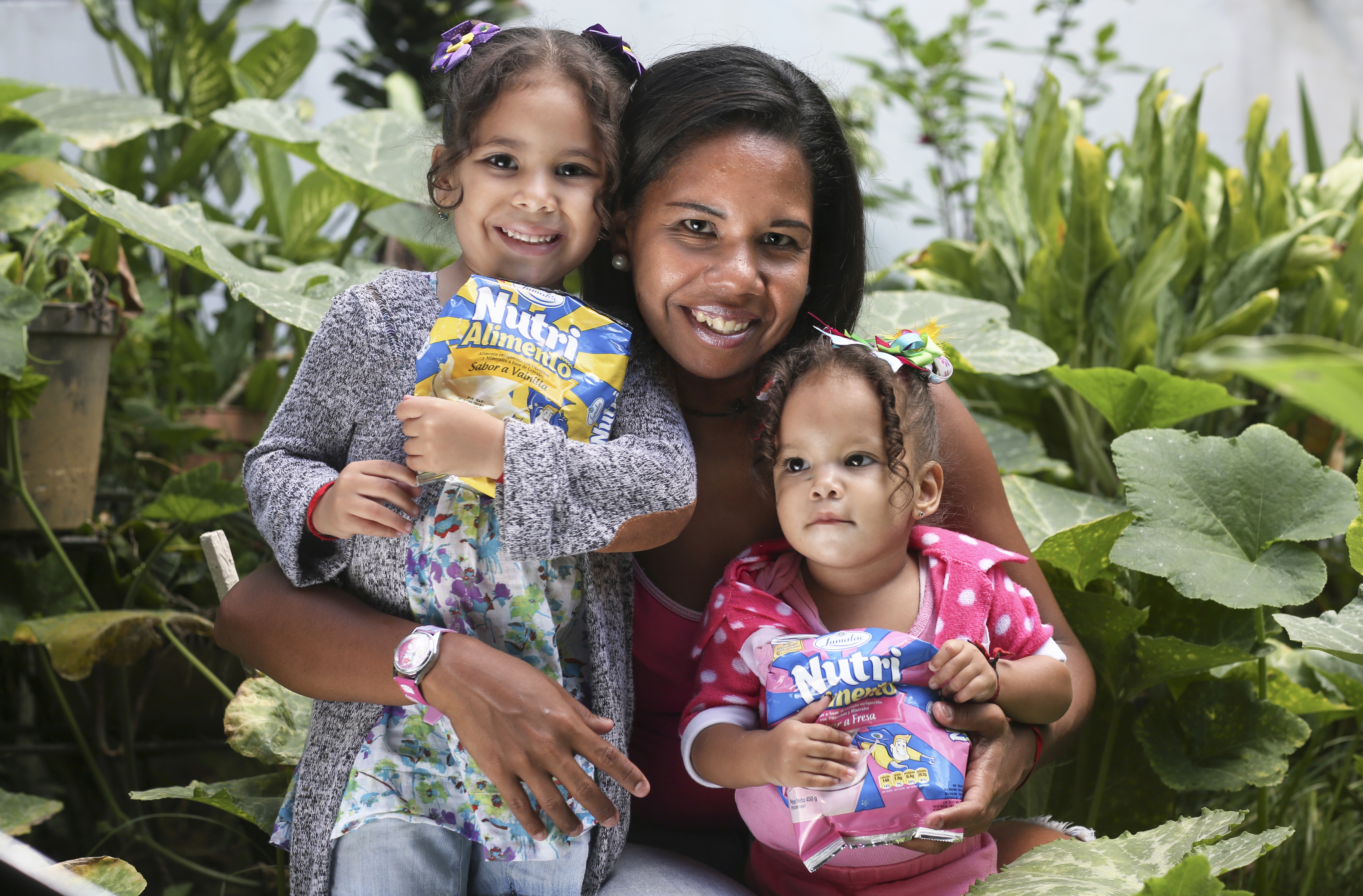 Milena Sosa, 34, with her daughters Barbara, 4, and Estefany 22 months, with their nutritional supplements given to them by Caritas Venezuela volunteers.