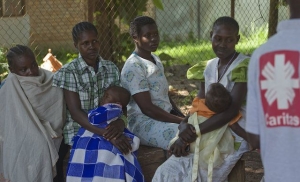 Mothers wait in line, as their young ones lay asleep in their arms, during an aid distribution in Yambio, South Sudan. Credit. Caritas

People caught in conflict in South Sudan are at a serious risk of famine by early next year unless action is taken now. The Caritas confederation has launched an emergency appeal for €2.5 million, (US$3 million) to help over 50,000 of the neediest people.

Donate to the appeal

“Many people are in a dire situation, especially those trapped in conflict areas,” says Gabriel Yai, director of Caritas South Sudan.

“The rainy season has made things very bad for people in UN camps and things will get worse as we head towards winter, especially in Upper Nile and Jonglei States.”

Fighting since December has forced 1.7 people from their homes and left 4 million people hungry. The South Sudanese Catholic Church declared last month that the civil war in South Sudan was “immoral”, saying that large-scale ethnic killing has created a cycle of fear and revenge, with perceptions that one tribe or another “deserves to rule.”

“There is no moral justification for any further killing. We can accept no excuses nor conditions from any party or individual for continuation of the war. The fighting and killing must stop immediately and unconditionally. Political and other grievances must indeed be addressed, but only when the fighting is stopped”. – The Catholic bishops of South Sudan

The ongoing conflict, plus a shortage of rainfall and scarcity of seeds mean that low yields are expected from harvests at the end of 2014.

The outlook for 2015 is of great concern, with 2.5 million people projected to be in a severe food emergency from January to March. The situation could become a famine if adequate help isn’t provided.

“Caritas South Sudan has access to some areas in Upper Nile region, but we don’t have adequate resources. We need support to be able to reach the needy in South Sudan,” said Gabriel Yai.

Caritas will focus on a number of areas. These include food, clean water, hygiene, shelter, health and psychological support. The programmes will be present in all seven dioceses in South Sudan.

The appeal aims to help people who are able to return to their area of residence, and provide emergency assistance for those who continue to be affected by crisis. Training will be provided in the various sectors to enable people to become more self-sufficient. Seeds and tools will be provided to help people provide food for themselves.