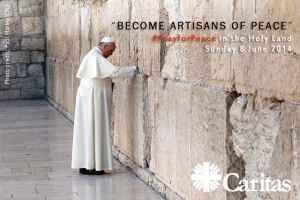 Pope Francis deep in prayer on his 2014 trip to the Holy Land. Copyright: CNS/Paul Haring

In his World Day of Peace message 2015, Pope Francis asks us to consider all men and women “no longer slaves, but brothers and sisters”.

Caritas organisations around the world live and breathe the words of Pope Francis’ message by fighting modern day slavery, accompanying the poor and vulnerable on their journey and laying the foundations for respect, justice and love….and ultimately, for peace.

Here are some ways Caritas member organisations across the world lived out Pope Francis’s words for peace in 2014:

“I think of the many men and women labourers, including minors, subjugated in different sectors, whether formally or informally, in domestic or agricultural workplaces, or in the manufacturing or mining industry; whether in countries where labour regulations fail to comply with international norms and minimum standards, or, equally illegally, in countries which lack legal protection for workers’ rights.” – Pope Francis

Many Caritas organisations work to help the victims of trafficking on a material, legal, psychological and spiritual level. Caritas Lebanon’s Migrant Centre gives a home to women who are victims of human trafficking and exploitation. They are offered protection, legal and psychological help and escape from their slave-like conditions.

Caritas Internationalis coordinates the work of the Christian Organisations Against Trafficking in Human Beings (COATNET) which raises awareness and fights for better laws to protect trafficked people and prevent exploitation.

“I pray for an end to wars, conflicts and the great suffering caused by human agency, by epidemics past and present, and by the devastation wrought by natural disasters.” – Pope Francis

Caritas appealed for €60 million euro in 2014 to help those reeling from wars, epidemics and natural disasters. Caritas staff worked tirelessly on conflicts in the Middle East and South Sudan, on the Ebola crisis in West Africa and on natural disasters such as floods in Burundi and Serbia and a cyclone in Tonga.

Brothers and sisters together

“But fraternity also embraces variety and differences between brothers and sisters, even though they are linked by birth and are of the same nature and dignity.”- Pope Francis

Caritas celebrated the role of women in feeding the world in 2014 with an International Prize: Women Sowers of Development. This was part of the confederation’s global food campaign ‘One Human Family, Food for All‘ which was launched by Pope Francis.

Accompanying migrants on their journey

“I think also of the living conditions of many migrants who, in their dramatic odyssey, experience hunger, are deprived of freedom, robbed of their possessions, or undergo physical and sexual abuse.”- Pope Francis

“I spent my time praying to God and crying because water was coming in the boat.” Aashif undertook a long journey of hope from Bangladesh to Europe and Caritas welcomed him on his arrival.

“In a particular way, I think of those among them who, upon arriving at their destination after a gruelling journey marked by fear and insecurity, are detained in at times inhumane conditions.” – Pope Francis

Caritas supports the Global Campaign to End Immigration Detention of Children. On the occasion of the 25th anniversary of the Convention on the rights of the child, it organised a Vatican Radio web debate to highlight, among other things, the issue of child migrant detention.

“ I think in the first place of poverty, underdevelopment and exclusion, especially when combined with a lack of access to education or scarce, even non-existent, employment opportunities.” – Pope Francis

Twelve-year-old Iraqi Christian Youssef doesn’t want presents for Christmas. “I don’t need anything. I just want to go home,” he said. “I just want to go to school again.” Caritas has been providing food, clothing, heaters, blankets and winterizing some of homes for around 10,000 Christians, Yazidis and Muslims in Iraq including Youssef’s family.

“States must ensure that their own legislation truly respects the dignity of the human person in the areas of migration, employment, adoption, the movement of businesses offshore and the sale of items produced by slave labour.” – Pope Francis

Caritas members work for economic and social justice by monitoring both governments and companies. For example, Caritas member organisations in Great Britain campaign against the effects of on people and society of mining in Colombia.