INSECURITY IN THE COUNTRY IS FURTHER COMPLICATING EMERGENCY OPERATIONS.

After the dramatic earthquake that hit the country yesterday, 14/08/2021, at 8.30 am local time, Caritas Haiti has already mobilised its teams to reach the most affected areas, which are the departments of Grande-Anse (Diocese of Jérémie), Sud (Diocese of Les Cayes) and Nippes (Diocese of Anse-à-Veau-Miragoane). As the search continues through the rubble, the current toll is more than 300 dead, about 1,800 injured and more than a thousand buildings razed to the ground, including churches, schools and hospitals.

“The entire Caritas Haiti network, especially the emergency team, is participating in coordination and aid operations in the three affected departments,” informs Father Jean-Hervé François, director of Caritas Haiti, who has already reached there.

Many churches have also been damaged by the earthquake. In Les Cayes, the residence of Cardinal Chibly Langlois, bishop of the diocese and president of the Haitian Bishops’ Conference, was damaged, and the cardinal was injured. A priest staying in the Bishop’s residence was killed under the rubble.

The government has declared a state of emergency for a month, and in the next few hours, Prime Minister Ariel Henry is expected to visit the sites of the tragedy with the relevant authorities to assess the general situation.

In a country which is in political turmoil, the aid operations are complicated not only by the terrible condition of the roads but also by the high level of insecurity. The earthquake could not have come at a worse time for the nation of 11 million people, which has been in the grip of a political crisis since President Jovenel Moïse was assassinated on 7 July.[/vc_column_text][/vc_column][/vc_row] 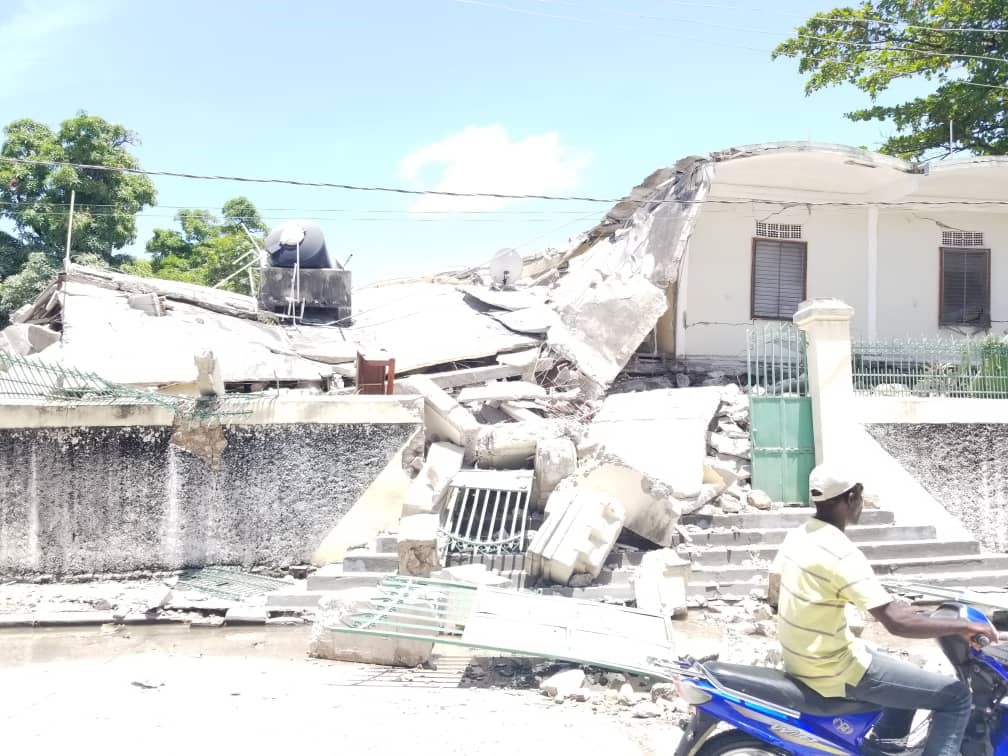 “Reaching the affected areas is difficult. The Martissant area, which is an obligatory access to reach the south of the country, is closed for security reasons,” says Father François.

The needs of the population are immense. “There is an absolute demand for food, water, tents, hygiene kits and first aid”, he adds.

“We witness with compassion and sadness, yet another natural disaster affecting the impoverished nation of Haiti, following the tragic earthquake that occurred 11 years ago and the numerous cyclones and earthquakes that have followed since then,” says Aloysius John, secretary general of Caritas Internationalis. The confederation has immediately launched a fund-raising campaign to support the work of Caritas Haiti. “Today, a manifestation of global solidarity is more than ever needed to bring the necessary support to the victims of this crisis,” adds John, highlighting that Caritas Haiti has to respond to this crisis in a context of COVID-19.

“In this terrible time, our colleagues at Caritas Haiti are once again at the service of all those in need. I want to assure the Church, Caritas and the people of Haiti, the prayers, sympathy and support of the entire confederation”.