Caritas Madagascar was founded in 1959 after a flood that devastated most of the island. It used to be a branch of Caritas France (Secours Catholique) and was called Vonjy Aina Katolika or Secours Catholique of Madagascar. Caritas Madagascar works through parish structures, districts and local dioceses to provide support for disadvantaged groups. It is involved in the aftermath of the natural disasters that afflict Madagascar – drought, cyclones and flooding – and is often the organisation best placed to reach the most remote areas.

Caritas Madagascar provides emergency assistance, post-emergency rehabilitation in the form of food aid, medical and hygiene kits, support for agricultural production and health programmes. It is also involved in agricultural development projects, such as seed distribution to ensure that crops are planted at the most appropriate times of year.

To carry out its humanitarian aid and development projects, Caritas Madagascar works in partnership with the Ministry of Energy and Mines, the World Bank, WaterAid, the Swiss Agency for Development and Cooperation, Campagne contre la faim pour le développement and other Caritas organisations including Secours Catholique, Caritas Malta, Caritas Belgium and Caritas Switzerland. 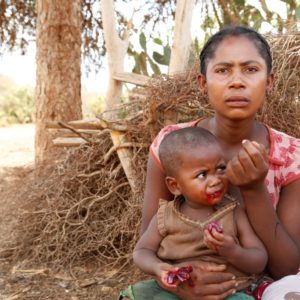 Five years of poor harvests mark what is now the country’s worst drought in 35 years, magnified by the effects of El Nino weather upheavals. 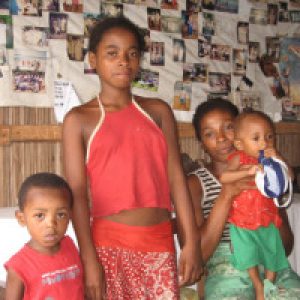 “I was about to make the worst mistake of my life,” says Angeline, a disabled widow and mother of three living in Madagascar. “Our house collapsed in the storm, and my children hadn’t eaten anything for almost three days. The baby was 11 months old and only weighed 6 kilogrammes.” “I was on the point ...